I went for a walk on a wet night during the fall to a nearby park that was having some construction done. That night I decided to wear some cheaper hiking shoes I haven’t really worn before. They were decently comfortable, but I’ve also gone through multiple pairs of these decently quick due to them being cheap. My walk was pretty normal until I got to the park. The park had lots of exposed mud due to machine movement and new areas being paved. Being the curious person I am, I walked along some of the muddy areas beside the trail, at best it kept the shape of the tread on my shoes and at worst it didn’t react at all to being stepped on. I continued on like this until I saw a larger mound of dirt and an area that would be made a paved trail soon. Right at the edge of the soon to be new trail was another muddy area. I tested it with my right foot and it was much softer than the other areas. I pressed down and my foot kept going down, soon the top of my shoe was covered in mud. After realizing that I may have went a little too deep, it was too late. I pulled my right foot back up, my shoe trapped in sticky muck, revealing my white socked foot. I tried to get my foot back into my stuck hiker, but I only made it worse by getting mud on the inside… I just accepted that it was a lost cause and stepped down on it to bury it deeper into the mud. Looking down at the dirty shoe on my left foot and muddy white sock on my right foot, I turned around and went home. I felt excited by my loss. I still have that left shoe as a bit of a reminder of that fun night.

Back in the 1970’s, my god mother Beverly had some guys enlarge the concrete patio around her swimming pool by pouring additional concrete. During the process, Beverly got into an argument with the guys about how they were doing the work. Fortunately, everything worked out fine with the work; however, Beverly had left an older pair of Sears Jeepers Sneakers near her back door. She found them filled with concrete that had dried solid like a rock. It was hilarious!

As a “revenge” prank on me, a couple of my sorority sisters boiled my canvas Tretorn Nylite sneakers in hot water and dried them in the oven. My size 8’s felt like size 7’s on my bare feet! However, they did stretch back to about a 7 1/2. Lol.

My friends have made it a running joke at this point to always steal one of my shoes whenever I get a new pair. Well it happened once again. I was hanging out with two friends at the mall, pretty much window shopping. I was wearing some black and blue nike shoes. We sat down at a bench near one of the exits to chill out before we kept going. Then out of nowhere, one of them grabbed my left foot and tried to pull my left shoe off. Since its a hi top shoe, he couldnt pull it off right away. He pulled with such force that I fell off the bench and onto the floor, and he dragged me a few feet trying to take off my shoe. After like 5 minutes of him not being able to get it off, he wrapped his arms around my foot so I couldnt move it, and just untied my shoe and managed to yank it off my foot. He immediately ran out the nearest exit with my left shoe. ME and my other friend couldnt find him for a good 30 minutes. He met up with him at the food court, but he said he hid my shoe and wouldnt give it back to me. Had to spend the rest of our time without my left shoe in my white sock 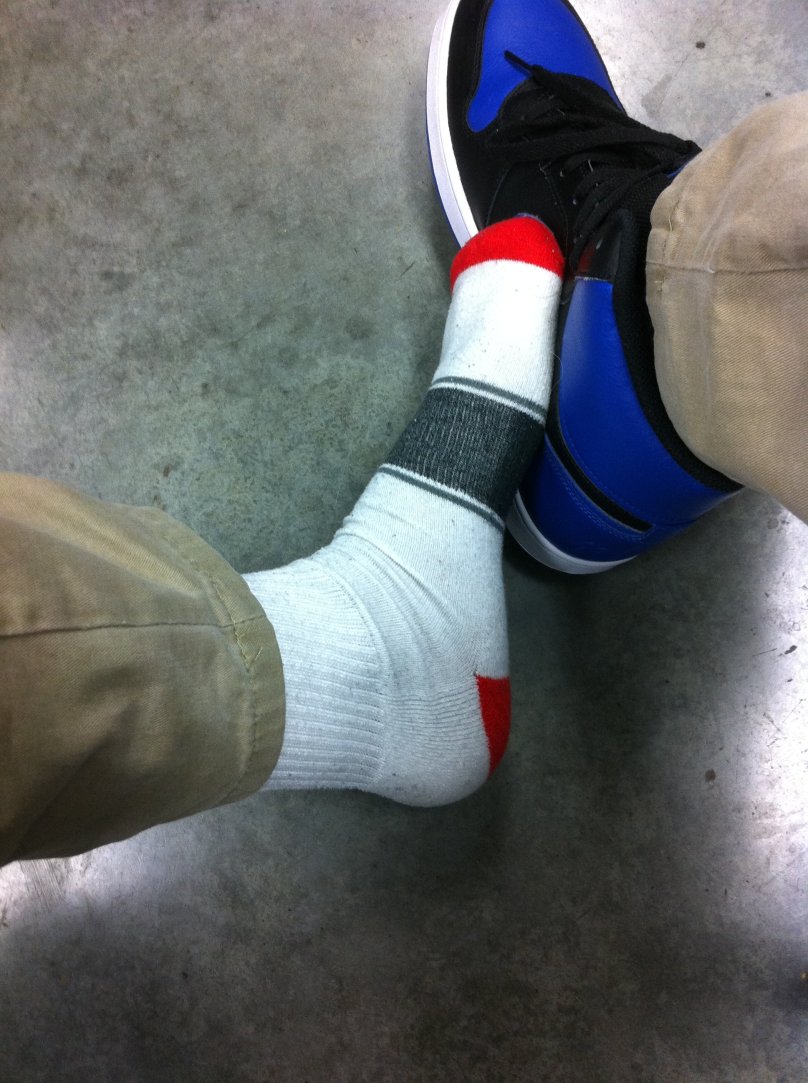 It was early December and the three 15 year old pals had been watching the usual vlogs on You Tube. “We can do one of those overnight challenges” said Bryn. “Where?” said Stan. “The out of town shopping centre” replied Nick. They agreed to get the bus on Friday, tell their parents they’d be stopping over at one another’s houses and hide until the centre closed and have some fun.
They arrived in the shopping centre and looked around for somewhere to hide. They decided a children’s play area would be ideal but kids where still playing and they’d have to wait til it emptied. They wandered around and noticed Santa’s Grotto “We’ll have some fun in there later” said Bryn. An hour later they heard an announcement telling shoppers the place was closing. They went and hid in the play area. A short while later the place was quiet, Bryn switched on his Go Pro and they started exploring. Now that the place was empty and quiet their trainers could be heard squeaking on the polished floor. So they walked slowly to Santa’s Grotto. When they arrived they could hear voices so hid behind Santa’s sleigh. “Perhaps a guard heard our shoes squeaking” whispered Nick. The voices disappeared and the boys decided to take off their trainers, they could run around and slide on the floor in their socks and nobody would hear them. The only thing was they would have to carry their shoes. “Let’s hide them in Santa’s sleigh, there’s lots of empty ‘present’ boxes. Bryn took off his black Nike Air Max trainers, Stan his Adidas and Nick removed his Nikes. They hid them in one of the boxes at the back of the sleigh. They found it fun running and sliding around the empty shopping centre in their socked feet. Nick found it amusing looking at shoes through a shop window whilst he stood with none on his feet. At midnight they heard workmen enter with machinery. They decided to go and hide in the play area. The work went on throughout the night whilst they where stuck shoeless inside a tubular slide. Nick said he found it thrilling knowing their shoes where at the other end of the shopping centre and they couldn’t get to them. Bryn said “What if someone actually finds our shoes and takes them”. The thought of losing their shoes sent a hot and cold flush of excitement through them all. They all eventually fell asleep inside the slide. They where awoken by a kid climbing inside the slide. It was the next morning and the centre had re-opened. The kids parents stared as the three shoeless teenagers climbed out of the slide. They wandered down the mall towards Santa’s Grotto, the place wasn’t too busy but it made their stocking feet more noticeable to the morning shoppers. They hoped their shoes where still in the sleigh. They arrived at the Grotto to see a queue of parents with kids waiting for Santa to arrive. His sleigh was missing, then Bryn looked up, the sleigh was hanging 25ft in the air attached to plastic reindeer. They had no choice but to go to the security office and admit they had been there all night and to ask for their shoes to be retrieved from the flying reindeer and sleigh. Their explanation was greeted with loud laughter from a guy who leaned over the counter and stared at their shoeless feet to confirm their story. “Sorry guys but those workman and their equipment won’t be back until January to remove the Christmas decorations” He laughed again at the shoeless trio as they turned to leave. “Looks like Santa’s one horse open sleigh will be looking after your trainers for Christmas and don’t forget to hang your stockings up” he laughed as he stared again at their stocking feet as he started singing ‘Jingle Bells’. They walked through the shopping centre, faces as red as Santa’s outfit, their embarrassment was to get worse as they now had to get the bus home in their socks as they couldn’t ring their parents to come and get them as they would not only have to explain being in a shopping centre all night but having their trainers jacked by Father Christmas too.

I’d love to update the site plan so there are no more annoying adverts for you guys. Any donations would be amazing and I’d be forever greatful.

Please don’t feel you have to though, I’ll keep updating and running the site for you all to enjoy free.